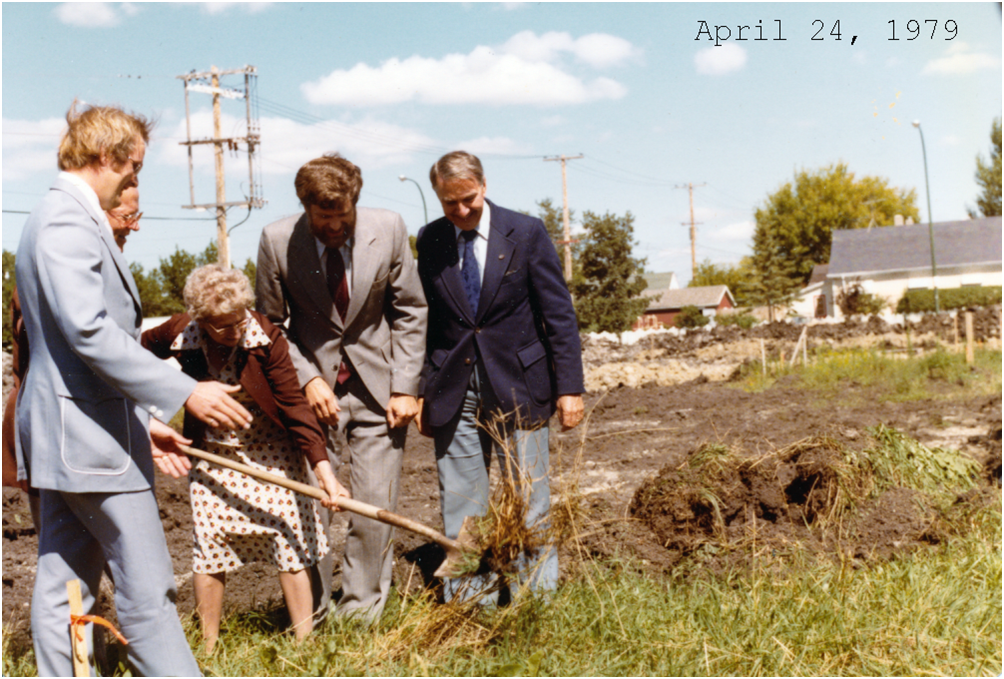 Bethel Place is owned and operated by Bethel Mennonite Care Services Inc. and has been a welcoming, safe and affordable home for seniors since opening its doors in 1980.

We have a proud and long history of serving our community well, and we continue to honour the hard work, commitment and vision of the dozens of individuals that made Bethel Place a reality.

In the early 1970s, there were numerous discussions at Bethel Mennonite Church (BMC) about assuming responsibility for seniors in the community, low income individuals and persons with disabilities, one of the strongest advocates being church member Anna Siemens.

This led to BMC undertaking some research, which showed there was a shortage of facilities such as housing and personal care and that most apartments for seniors did not have any additional facilities such as doctor’s offices, beauty salons, food services, recreational facilities or green space. It became very obvious that quality of life should be a guiding principle throughout the planning of the new facility.

Fundraising and a new Board

Though Sargent Mennonite Church had another project they were working on, the other 4 churches joined BMC in 1976 to form an official Board of Directors and to assist in fundraising efforts. The founding Board of Directors members were:

The name for the project, “Bethel Place” was suggested by Rena Kroeker, and was approved by the new Board.

BMC next purchased the land across Carter Street from the City of Winnipeg for $200,000, but then realized there were a large number of concerns that needed to be addressed. In addition, C.N. Friesen proposed to the Board that he step down as Chair and take on the role of Co-ordinator. This was agreed to by the Board and John Martens became the new Chair. Architect Harold Funk was then asked to draw up preliminary plans, but as we needed an architect with experience in large seniors housing projects, Vic Heinrichs of Toronto was hired to be the Lead Architect (with Harold as our local contact).

C.N. Friesen has said of those early planning years that he had to meet with at least 35 different departments, agencies and committees to process all the requirements and paper work to get Bethel Place approved. Some of the major obstacles the first Board noted it had faced included the fact that Carter St. between BMC and Bethel Place had to be purchased and the lane between Carter and Weatherdon Streets was not part of the original purchase agreement. Also, Manitoba Hydro owned all the land to the west of the plan, but not the lane, so there were additional negotiations involved. The original plan also included covered access between the church and Bethel Place, but this turned out not to be possible due to the underground infrastructure beneath Carter Street—moving it would have cost $250,000.

The original plan also called for a 6th floor dedicated to personal care, but the City permit at that time would not allow more than 5 levels. The Canadian Mortgage and Housing Corporation (CMHC) and Manitoba Housing and Renewal Corporation (MHRC) were also part of all the early discussions and BMC received a very substantial loan from CMHC. However, South Oak Inn could not be included on the loan, so the founding churches funded it themselves.

The final plans were approved by the City on August 17, 1979 and a sod turning ceremony was held on August 25, with major construction immediately after. The project continued through the winter, with the whole building encased and heated so that all the construction and trade workers could work in a comfortable environment.

The official opening of Bethel Place was on September 19, 1980 and was held indoors in the Multi-Purpose Room (MPR) due to rainy conditions. Among those participating were:

The year 2015 was a milestone year for Bethel Place. It marked the 35th anniversary of its operating agreement and mortgage with MRHC—in September of 2015, our mortgage was paid off!

Bethel Place celebrated this historic event, and our Board is now carefully considering the question, is now the time to purchase the land on which our facility is housed.

As we celebrate our history and contemplate our future, we remain firmly committed to providing our residents with an affordable home in a vibrant and caring community.